I'm going to be relocating this blog to the newly revamped Skeptic Freethought network.

I'll leave all of my old posts here for now, but all future entries are going to be at http://skepticfreethought.com/honesttogodless/.

Excuse its plainness, as it's still under construction.
at 01:36

A quick word about gun control

I normally don't add my two cents to the noise surrounding breaking news about tragedies, but I'm making an exception in this case.

Between today's school shooting in Connecticut, last week's mall shooting in Oregon, the cinema shooting earlier this year, and any others I've lost track of, it's evident that mass murders involving guns are becoming frighteningly common in this country.

Left-wingers have been quick to call for more gun control, and right-wingers have been quick to defend gun ownership rights (and censorship advocates are already blaming it on violent video games, but that's another story). This happens every time there's a mass shooting, and every time the discussion breaks down into two groups shouting at each other from opposite sides of the aisle and ends up going nowhere. Repeat a few years months weeks days later when another mass shooting occurs.

This needs to change. We need to stop arguing and start investigating. Let's look at what factors contributed to the tragedy, and then let's look at what we can do to prevent a tragedy like this from happening again.

When we talk about our 2nd Amendment rights, let's keep in mind that when the document was written, the deadliest weapon you could physically carry was a flintlock musket. It took a full minute to load, aim, and fire, and if that didn't take down your enemy before he closed in you'd better hope you had a sharp bayonet to stab him with.

Today we have handguns that can hold a dozen or so rounds that are automatically chambered after each shot. We have rapid-fire rifles that can fire several shots in less than a second. We have bullets that aren't just an oblong ball of lead, but rather aerodynamic projectiles that can be specially shaped to pierce steel or shred soft tissue.

I'm all for responsible citizens being able to own small arms for self-defense, hunting, and recreational target shooting. I'm for it in the same way that I'm for responsible citizens being able to own motorized vehicles to get from place to place without having to walk or depend on public transit. Guns and cars alike may be bought for a legitimate purpose but easily hurt people through negligence or malice. We don't let people operate cars without first ensuring that they know how to do so safely. Can liberals and conservatives come to an agreement on how to do the same with guns?

Three Minutes in the Moon's Shadow

Last month I had the unforgettable experience of watching a total solar eclipse for the first time in my life. I'd say it is, hands down, the most spectacular natural phenomenon that you can observe with the naked eye.

It's a sight that many people only get to see in pictures and videos during their lifetimes, unless they happen to live in the right place at the right time or have the wherewithal to travel there.

I'm unhappy with the way I see other atheists behaving toward one another on the internet.  When I look at my Twitter feed, I don't see a group of rational adults promoting skeptical inquiry and working together to improve society.  I see a bunch of bratty, cliquish teenagers starting fights in the schoolyard, taunting people who aren't like them, and spreading nasty rumors to hurt their social rivals.  And I'm sick of it.

I'm sick of all the feuding between people who want to harshly criticize religious ideas for their absurdity and those who want to buddy up with religious progressives who reject the more barbaric doctrines of their faith.  I'm sick of all the feuding between feminists who call out harassment and people who call them "professional victims."  I'm sick of this damned-if-we-do, damned-if-we-don't double bind about criticizing Islam the way we do Christianity.  I'm sick of seeing someone being relentlessly heckled day and night by persistent trolls-stalkers because she came up with an idea the slobbering masses didn't like.

You know what?  I like hanging out with people who share interests with me, be they atheists, agnostics, humanists, or religious adherents. I like volunteering at food pantries and soup kitchens, donating blood, working out, and playing video games.  I'm going to take a break from the blogosphere and focus on those things for now.  I don't have anything new to say, and there's no sense in my adding to the deafening noise in this movement.  I haven't seen anything new to read in a while, and I'm going to stop wasting my time following the drama.

So, on that note: deuces, TTFN, YOLO, and adios.

A word about "Islamophobia"

If you're paranoid that the mild-mannered Muslim family down the street are secret terrorists, or that a Department of State aide with a foreign-sounding name is a deep-cover mole for the Muslim Brotherhood, then "islamophobe" might be an appropriate label to affix to you. 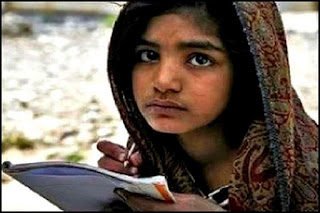 On the other hand, if you're genuinely worried about the spread of a culture that advocates lynching an 11-year-old girl because she had a burnt piece of paper in her bag that may or may not have been from a Qur'an, I'd say you're a rational human being who is rightfully afraid of a truly horrible thing.


"This girl is guilty. If the state overrides the court, then God will get a person to do the job," said Raheem.

If that kind of thought is viewed as a positive thing in your religion, consider me militantly intolerant of your beliefs.
at 16:45

This Saturday, my wife will be a rider in Pelotonia, an annual charity bike ride held in central Ohio to raise money for cancer research.

100% of the proceeds from Pelotonia go directly toward cancer research at the James Cancer Hospital and Solove Research Institute at Ohio State University.  You won't find many charities that can truthfully say that every penny of your donation goes toward the cause they support.

Email ThisBlogThis!Share to TwitterShare to FacebookShare to Pinterest
Tags: personal 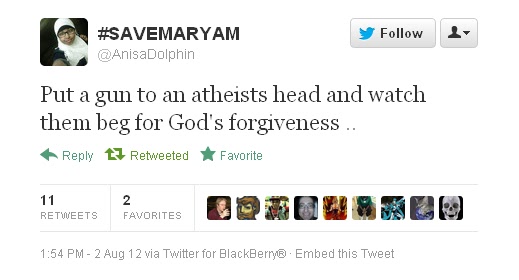 Sorry, kiddo. That's not God I'd be talking to. I'd be talking to the psychopath holding the gun. Though, hey, I'm pragmatic. I might say just about anything to get you to put the gun down.

If the only way you can get an atheist to pay lip service to your God is with a gun to their head, you might want to seriously reconsider the merits of your faith.
at 15:32

Other Links of Interest